Some may remember the days when open mics were plentiful in downtown Sturgeon Bay; The Nautical on Tuesdays and The Red Room on Wednesdays. Something happened, though, along the way; the weekly hosts moved away, The Nautical closed, economic downturn, massive construction and bridge closures all took a hit to the downtown music scene already struggling to survive. 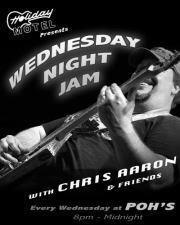 Though Erich Herbst has devotedly continued hosting a Tuesday open mic out at Waterfront Mary’s, the fact remains that a regular live music scene downtown–other than during Steel Bridge SongFest–has all but up and disappeared…. until recently.

“I’ve always hoped that venues in the downtown area would pick up where Steel Bridge SongFest left off and have more live music on a regular basis especially considering all that they take in during the week of Steel Bridge, it just seemed entirely feasible that they could earmark some of that money for musicians looking for a few gigs throughout the year.”

Though some of the downtown venues–like The Red Room, Cherry Lanes, The Nautical and now Untitled Used Books–have occasional live music on weekend nights (and Stone Harbor who consistently hosts music on Friday and Saturday nights) no one has committed to hosting a weekly, weekday music event in the downtown area other than The Holiday Music Motel which hosts a weekly original open mic on Thursdays from 7-9pm.

With the return of Chris Aaron to Sturgeon Bay this winter as a permanent resident, mAcdonald was inspired to talk to George Poh of Poh’s Corner Pub about holding a weekly open jam with Chris Aaron as the regularly featured host. Fred Young–of Young Automotive–offered to provide the necessary sound equipment each week. George agreed and Poh’s quickly has become a regular Wednesday showcase of talent from both near and afar and a favorite watering hole for mid-week music enthusiasts.

“This isn’t a normal open mic,” says mAcdonald. “It’s a weekly chance for this little growing community of Sturgeon Bay musicians and songwriters to get together like a loose-knit band and back each other up on each other’s tunes. The group and the repertoire is growing week by week. It’s becoming more and more like an impromptu show that is actually quite entertaining for non musicians too.”

And so it goes to show what a little bit of persistence and community can do to inspire a scene that draws all kinds, from all places, to a small mid-western town such as Sturgeon Bay.