It’s no secret: Valentine’s Day is ‘THE’ romantic’s holiday. Yes, diamonds, and flowers, and hearts, and Cupids fill the airwaves and the inter-web, urging us all to do something special for that someone special.

Wisconsin’s most romantic man did just that for one woman named Christy, at Bayside Tavern this February during the Fish Creek Winter Festival, 2014. Want the whole story? We thought so…

Dave Foshey, his brothers, close friends and their wives, have been coming up for their annual winter weekend in Door County during the Fish Creek Winter Festival for over fourteen years. For the last seven of those years, Dave brought Christy with him. 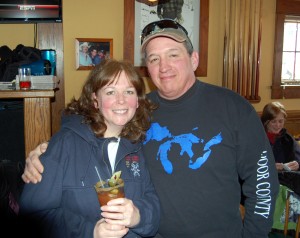 Christy & Dave at the Bayside

Christy and Dave, both single parents, had been dating for those seven years and their alone time was at a premium, so this weekend was THEIR weekend. This couple and their family and friends were totally into the Winter Games. One year they even entered a team in the Foosball competition. Whether it was too warm or too cold, they came. In fact, you could say they were the Winter Games #1 Fans!

But there’s more … not only were the Winter Game in Fish Creek ‘their thing,’ Christy’s favorite thing of all was to go to the Bayside Tavern, down the street from the Winter Games, on Saturday for a mid-day Bloody Mary and appetizers. “I hope they never change the Bloody Mary recipe [at the Bayside],” she says. “It’s the best I’ve ever had.”

Unknown to Christy, Dave planned to propose on that cold, sunny day at the Bayside, by hiding an engagement ring between the pickle and the olive on her Bloody Mary, and waiting for her to nibble her way to the surprise. He enlisted his brothers and sisters-in-law to help him ‘spirit’ her drink to a corner so he could hid the engagement ring.

Christy mentioned then that everyone in their group loves the Bloody Mary’s, except Dave! But Dave’s brother, who had just been clued into the big reveal, couldn’t stand the wait and said to Christy, “are you ever going to eat that pickle?!” 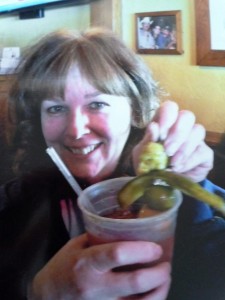 Christy wasn’t really paying attention, she said, she was busy talking and having a very nice time in her happy place, so she absently picked up the pickle—and that’s when she saw it.

She looked over to Dave and noticed that his eyes were full as he walked over to her, and bent down on one knee and proposed. She accepted and the place just erupted in cheers, applause, and hugs from strangers.

Later Christy asked Dave about his eyes, and he told her that the sunshine coming through the windows caused his eyes to water … “We weren’t even near a window,” she said, a smile apparent in her voice.

Dave and Christy were friends for a long time before they started dating, and as the experts tell us, that’s one of the best ways to start a solid relationship.

“He’s my best friend,” says Christy, “he makes me laugh every day and I am so lucky to have him in my life. I waited a long time for someone to share my life with.”

Door County, Wisconsin is full of romance all year long, tell us YOUR story at