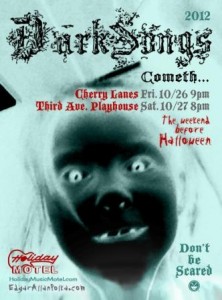 Like the immortal Johnny Cash, Edgar Allan Poe was known to dress in black.  Like the legendary rocker Jerry Lee Lewis, he married his 13-year old cousin.  Like many of history’s mad geniuses, he died penniless. And, befitting the great mystery writer, his death arose from mysterious causes under even more mysterious circumstances.  He barely made it through his 40th birthday, so one might imagine he liked to party.  At the very least, he loved to entertain. To this day, classic masterpieces like “The Raven” and “The Tell-Tale Heart” still provide gloomy reverie for some, gleeful revelry for those of us who enjoy a good dance on the dark side.

This inspiration led to the birth of “Dark Songs / The Edgar Allan Polka,” a songwriting/recording/live-performance event held at The Holiday Music Motel during the last week of October. Much like Steel Bridge Songfest, Dark Songs attracts artists from around the globe to collaboratively write and record original songs inspired by the Halloween season. Those songs, along with songs from past years, are showcased during two special weekend performances.

More information and a complete listing of this year’s lineup, visit the Holiday Music Motel’s website at www.HolidayMusicMotel.com or calling 920-743-5571

This year’s performers include: