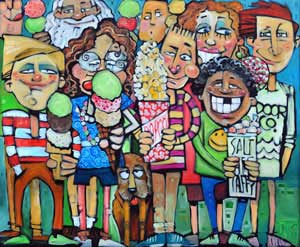 Life is Sweet by Tim Nyberg

Tim Nyberg reminisced about an ice cream parlor in White Bear Lake, Minnesota that he used to visit as a child, “There were high ceilings with beautifully rendered Maxfield Parish-esque peach-tinted clouds all around tops of the walls. Those paintings really made it a magical place.”

Tim mentioned what an asset the high ceilings were. He suggested that Terry could make good use of the tall ceilings by hanging appropriately-themed paintings in the  areas above the merchandise. Terry, wishing to reinvent and update the popular confectionery with its move, agreed it would be a good idea.

In two days, Tim walked over with a large five by six foot canvas titled, “Candy Store Kids” and asked Terry if he would “store it for him.” Terry loved the painting and was thrilled to oblige.

In a few days, Ullman walked across the street to Tim’s Gallery 42 and asked about creating four more paintings to be used as signs above the specific food and merchandise areas. A quick check for the appropriate canvas size and Tim went to work on four more whimsical, colorful paintings.

Never one to miss an opportunity to update and improve a corporate image, the graphic designer side of Nyberg went to work creating a new branding for the confectionery – based on their web site, Door County Candy.com. He also fashioned a whimsical treatment of Terry’s “Life is Sweet” tag to be used on apparel and other merchandise.

Next time you walk into Terry’s confectionery you will not only be greeted by friendly staff, the wonderful smells of freshly popped corn and the colorful array of candies and merchandise, you’ll also have your eyes and spirits lifted by Tim Nyberg’s whimsical paintings.

More of Tim Nyberg’s art may be viewed at g42 (Gallery 42) in Sturgeon Bay, at J. Jeffrey Taylor in Fish Creek, and online at g42art.com.