EGG HARBOR, WI (Sept. 7, 2015) – Fall is prime beer festival season, thanks to crisp weekend afternoons and idealized dreams of Oktoberfest. (Hey, after a beer or three, everyone thinks the Chicken Dance is a great idea.)

In 2011, a passionate group of beer lovers and Egg Harbor Business Association members banded together to create the Egg Harbor AleFest. From amber ales and hard cider to oatmeal stouts and Belgian pale ales, the Egg Harbor AleFest tapped in to the craft beer craze with their first event in 2012. It just took off immediately. Attendance has been over 700 people each of the last three years.

“It is a popular way to beat the heat, celebrate fall, and taste test a number of unique beers by raising a glass of ice-cold beer with friends and neighbors,” says Jeff Larson, Egg Harbor Business Association president and event organizer. “For the die-hard beer fan, the fourth annual AleFest on Saturday, September 19th is the best time to visit. You’re invited to enliven and tantalize the taste buds.”

Once again this year there will be more than 40 brewers and 120 different crafts beers represented. It draws many of the small and independent Wisconsin brewers, like O’so Brewing, Wisconsin Brewing Co., Stone Cellar Brewing, Stillmank and Badger State. And there are a fair number of brews from the Midwest and beyond. And the number of samples included in your general admission ticket is unlimited.

Beer lovers may roll their eyes at what seems like more mainline offerings from Alaskan, Shock Top, New Glarus, and Sierra Nevada, but the lineup has enough breweries you don’t see in every local bar – to keep things interesting for festival newbies and veterans alike.

First and foremost, the event is a celebration. Let’s start with the music – it’s live and loud. The O2M (One Too Many) Band from Milwaukee is back for their third year at the event. They love to party. And they love to rock.

From the One Too Many Band’s promotion copy: 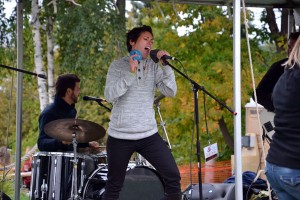 Vocals and visuals by the hardest working (drinking) girl in show business, the lovely Ms. Bette E. Ford. She puts the High in High Octane. Try to stay with her and she’ll leave you in the dust. Too much horsepower! This is one loud girl!

The supporting cast of Lounge Rats consists of numerous has been’s and never will be’s. All are currently living at the Y. We met in rehab, where we played for therapeutic reasons. Only the bass player, Brian Ray is decent, but constantly battling demons (and losing). Lenwood on harmonica, Joey Wagner beating his … drums, and Fabulous Johnny Rockit on guitar, complete the band.

The band tunes up and starts playing with the VIP admission at noon, and unplug the amps at 5pm (when the last call is served). During the O2M Band’s mid-afternoon break there will be a bluegrass band stepping in to keep the music going.

The entire food-and-beverage experience is one to, well, savor. Is there food? You bet. They will have a variety of tasty offerings to purchase that are sure to please everyone’s palate. General admission tickets start at $40 online. Visit EggHarborAleFest.com

There is a VIP option, and this ticket gives you unlimited food to accompany the unlimited tasting and early entry.

There is something to love about the location. Harbor View Park is located in the center of Egg Harbor, and overlooks the marina and sparkling waters of the Bay of Green Bay. Scenic beauty and free-range tasting gives the event a certain atmosphere. Taste in style or discuss the finer points of your beer exploration.

Should you find yourself in Egg Harbor for this year’s festivities, Larson recommends booking lodging in Egg Harbor and taking advantage of the free trolley shuttle service running from 11am – 7pm. “You can drop into the Village early in the day, eat some lunch – then attend the craft beer tasting event – and grab dinner and still be driven back to your choice of lodging. We promote drinking responsibly.” 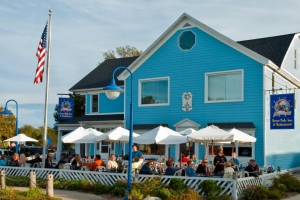 Egg Harbor’s own microbrewery, Shipwrecked Brew Pub, will be represented of course, and the restaurant will be open and serving for Labor Day Weekend.

Join the craft beer explosion. See what all the hoopla is about. Embrace this rich lifestyle. Come join the fun and tasting at the September 19th Egg Harbor AleFest. As the festival’s tagline states: “It’s ale we be drinkin.” The Egg Harbor AleFest is more than great beer and great music … it’s great fun.