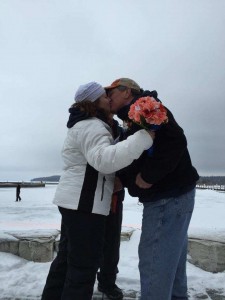 Think of the most romantic place to get married. I bet you wouldn’t even think of Door County, at a festival, outside, in the winter, but that’s just what one couple did a few weeks ago.

Christy and Dave Foshey are THE #1 fans of Fish Creek’s Winter Games. They, along with family and friends, have been attending the Games for 15 years. During last year’s Winter Games Dave even proposed to Christy using her favorite drink, Bayside’s Bloody Mary, to get that engagement ring to her in the most creative way possible—on a skewer between a pickle and an olive [Read the Engagement Story].

Initially, they had planned on marrying in Door County in July, but it never seemed right. Finally, they decided that what they really wanted was to have their wedding outside during the Games in Fish Creek, their special happy place. With the help of Erin Sutton, marketing director and coordinator for the Fish Creek Civic Association, their wedding plans were realized. “Everyone was so helpful and accommodating the whole way through,” said Christy. “That’s one big reason why we love Door County so much. It’s more of a family feeling here.” 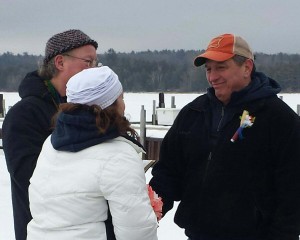 The weather cooperated so that they could have the 15 minute ceremony, officiated by Allin Walker, outside on the ice. The DJ announced the wedding and invited everyone under the tent to witness the event. Everything was going smoothly when Dave’s daughter Jamie Foshey, (floral designer and owner of Leaves Floral Design) surprised Christy with a bouquet of silk flowers and special keepsakes—a locket with a photo of Christy’s Mom and Dave’s Dad, who had passed many years ago—bringing the whole family together on this special day. This emotional moment slowed the ceremony down just a bit, but soon they were ready to take their vows.

“It was perfect,” said Dave. “In the background was the ice, the bluffs, and American flag waving and then the kickball teams came out to play. Then we went to the Bayside Tavern which was crowded as usual. Someone who had been at their wedding, another stranger, loudly announced that Dave and Christy had just gotten married and people started congratulating them. The manager at the Bayside, Bob, gave Dave and Christy wedding shots and Bayside t-shirts. 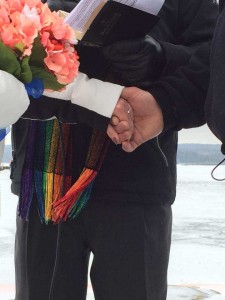 The whole wedding party did all their favorite things Saturday, but the highlight was the kickball game, which they tied while wearing the team shirts: Team Wedding – another gift to the happy couple. Eventually the game was decided with ‘Rock-Paper-Scissors’ and Team Wedding lost, again, another happy tradition.

The Fosheys and their wedding party spent the weekend at the High Point Inn, where they always stay and for good reason. “They let us take over the lobby,” said Christy. Not only did they have their wedding reception there, some friends ordered an ice sculpture made by a local ice carver as the centerpiece. Picture a C resting on a D sitting on the table. Dinner was organized and prepared by Dave and Christy’s family and friends but the wedding cakes and cupcakes were baked by Sarah Basch of FlourGirl Patissier, and baker at Alexander’s Restaurant in Fish Creek.

All weekend serendipitous moments kept happening. Christy’s dad and his wife, Bill and Ruth Stevens drove up Friday night and just happened to meet Dave and Christy on the sidewalks of Fish Creek on their way to the Bayside. Strangers told them romantic stories of their meetings and weddings. While they were at Alexander’s a newly married couple on their honeymoon in Door County gave them a bottle of wine as a wedding gift.

The best wedding gift of all came from Dave and Christy’s newly combined family. Christy’s two children: Michael and Jessica; and David’s three children Jamie, Josh and Megan were introduced to the Fish Creek Winter Games for the first time and loved the whole experience so much they’ll be back next year. But they gave as good as they got: After the ceremony a large package was presented to the happy couple which, when unwrapped, revealed a family portrait of their children, plus the family dog, Molly. 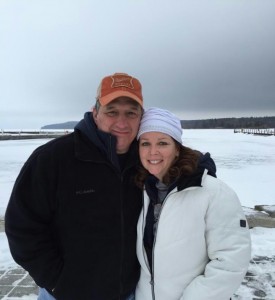 The whole party had breakfast together Sunday morning at Chef’s Hat in Ephraim, which they’ve done two years in a row now. “We called ahead and came early Sunday before the rush,” said Christy. “The food there is incredible and they make it so easy for all of us to be together.”

And finally, the trip to Charley’s Smokehouse completed their wedding weekend. Dave said, “The salmon there is the best and everyone just loves it. They really know what they’re doing.”

Christy and Dave are the first couple to get married at the Fish Creek Winter Fetsival, but we suspect this story may inspire other adventurous couples to start their lives together in unconventional ways in Door County. “We keep coming back to Door County because of the way we feel when we’re there. It’s really more of a family feeling,” said Christy.

I think that Dave and Christy’s unique wedding has made them a part of Door County’s story.